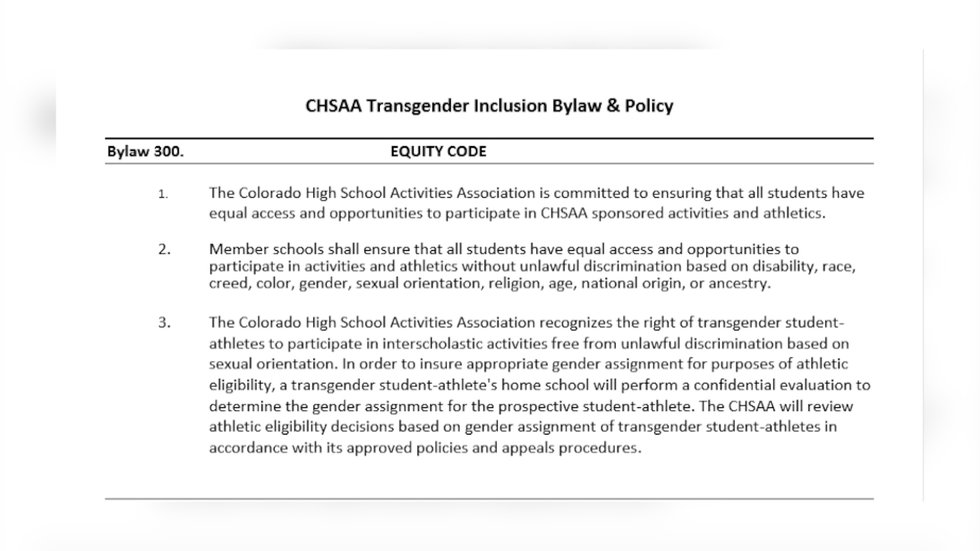 Eight states have passed their versions of these bills, proving that transgender issues remain controversial across the country.

In the state, the Colorado High School Activities Association â€œrecognizes the right of transgender student-athletes to participate in interschool activities without unlawful discrimination based on sexual orientation.

Even though Colorado is seen as having friendly state guidance on including transgender and non-binary students, that doesn’t mean there hasn’t been a backlash from some state leaders.

Recently, Representative Lauren Boebert took to Twitter to voice her opposition to the transgender New Zealand weightlifting athlete, saying her participation in the category was unfair.

We tried to get in touch with the Boebert representative, but our phone calls and emails were unanswered.

Representative Boebert is not the only person concerned about the sport participation of transgender athletes. Aidan Key says he’s traveling across the United States to respond to such apprehensions.

Key is a speaker, author and educator who works with the Gender Diversity organization. He also worked with the Washington Interscholastic Activities Association to help create the first K-12 transgender inclusion policy in the United States.

â€œWhat I can say is that 14 years ago we started this conversation and we talked about a way to start and we started,â€ Key said. â€œI remember the first interview that was done about this policy was 10 years later and after 10 years we can report how it was, and how it went really well. . Yes, there were and are trans athletes participating in K-12 sports and they win and they lose. They are part of their teams. Acceptance of their presence is happening.

Key said you shouldn’t worry about inclusion programs, but the impact of those bans on those they limit.

“I don’t think it is too much to say that not only these sports bills but others targeting doctors providing affirmative care to these children, measures that attempt to criminalize parental support of the identity of kind of their child are all going to have a body count, “Key said.” These children, a number of them will die because of these horrific measures. “

While he does not support the bans introduced in some states, Key said he was grateful for the conversation they opened.

â€œI think if we step in and actually have the conversation we need, we’ll start to recognize things,â€ Key said. “We will recognize that yes, we are actually a little intimidated by this conversation, so let’s just admit it and step in and say how do we do thisâ€¦ We didn’t have the visibility that we have trans kids like we do today.” hui, so how can we even begin to know how to be inclusive? Well, we are learning. Is this learning scary? the reality is not, getting into it is the scariest part.

â€œWhat I’ve found even in these communities like Montrose and Ridgway and other places I’ve been across the country is that the bullying factor goes away. Trust is really built and it is among the adults in the community because if we look at the children they don’t understand why there is so much distress.

Kacee-Lyn Hahn went through her transition to college and feared continuing the sport she loved so much, but said the support she received from her program made her realize that she belonged to the sport.

â€œThey were very receptive and welcomed me with open arms, which gave me a lot of power,â€ Hahn said.

She says if more programs provided the support she was receiving, transgender women and men in sport might not be so controversial.

“If we were to change the sports industry and include more inclusion, we would really start to change society over time and I really believe that.”

Hahn has a message for transgender youth who are reluctant to participate in a sports program.

â€œDuring your transition you’re going to have a lot of tough times,â€ Hahn said. â€œPeople will judge you and speak behind your back. It is their business. It’s not your business. There are so many other trans women currently fighting for your right to participate in sports in general … understand that you also deserve the right to participate in sports no matter your gender or preferences.

When we asked the Colorado High School Activities Association about bans being implemented in certain states, Commissioner Blanford-Green said that â€œour policy is in place but remains fluid based on the end results envisioned at the state, federal and international levels. . Our position has always been that this is a matter of student confidentiality and that schools will determine eligibility. The Association would only enter into these discussions if requested or necessary after the first decisions at the local level had been taken. Protecting student privacy is essential, therefore local educational entities are the starting point for our students.

The Day – History in parade