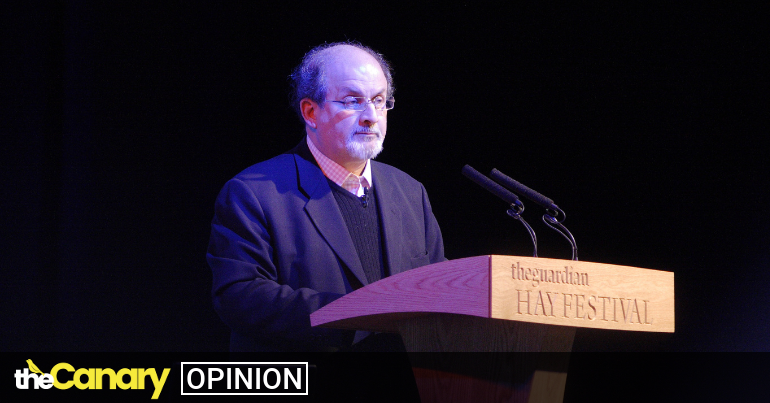 We can condemn the attack on Salman Rushdie without hitting Muslims

Salman Rushdie was offensive in New York State last week before he spoke at an event. He was stabbed at least 10 times in the neck, face and abdomen. As of this writing, Rushdie is said to be in critical condition. But he was taken off a ventilator and is able to speak again.

A number of prominent authors, as well as political leaders, sent messages of support and solidarity to Rushdie. Some people even chose to support him by buy copies of his most famous work, Satanic verses.

But here’s the thing. Rushdie is best known for protests by some Muslims in response to satanic verses. Most people have heard of the fatwa against Rushdie of Iranian Ayatollah Khomeini in the 1980s. For something that has been talked about so much, there is a lot left unsaid.

Before we really get into it, let’s make one thing clear: there is nothing in this article, stated or implied, that should be construed as support for the attack on Rushdie. It’s slightly ridiculous that I even have to mention that I find the attack on his life heinous, but that’s the world we live in.

However, the perspective that was missing in media coverage of the incident is that of Muslims who do not have the privilege or platform that Rushdie has. It makes my stomach turn to see people recount the Rushdie affair of the 80s as an example of fundamentalist Muslims unable to contain their innate violence. As often happens with outbursts of solidarity, the problem is more complex than it seems. satanic verses was published before I was born, but I remember my family discussing what they thought of the book, Rushdie himself, and the protests.

Whichever way you slice it, Rushdie has become a symbol against Islam. The publication of the book propelled a well-known author to stratospheric heights of fame. Rushdie has become synonymous with free speech. Of course, 9/11 transformed Islamophobia into the full-scale monster we know today. But, Rushdie’s contribution to a grand narrative of the “Islamic world” as a) homogeneous, and b) inherently violent is undeniable.

This point is difficult to explain, as much of my understanding of its influence comes from my childhood as a British Muslim. Instead, let me show what I mean by taking a look at the commenters of the Guardian.

The Rushdie case marked a turning point in British political and cultural life, bringing to the surface issues such as radical Islam, terrorism, the limits of free speech and the limits of tolerance.

But we must show our fellow human beings more than “tolerance”. We owe ourselves more than just supporting the people around us. To speak of the limits of tolerance is therefore to speak of what cannot be tolerated.

For many Muslims, the Rushdie case was another example that no matter how politely you condemn the violence against Rushdie himself, Muslims as a whole are still treated as barely tolerable. Muslims know very well that any criticism of Rushdie’s policies, without condoning violence, is not welcome in this discussion.

Malik describes the essence of his argument in saying:

It is in a plural society that freedom of expression becomes particularly important. In such societies it is both inevitable and, at times, important that people offend the sensibilities of others. Inevitable, because where different beliefs are deeply rooted, clashes are inevitable. It is better to solve them openly than to suppress them in the name of “respect”.

In fact, it is a misinterpretation of the Rushdie case to say that it was about offended “sensibilities”. Muslims did not have the grace of full and open discussions about what they thought of the book itself and Rushdie’s politics. The discussion was dominated by the insistence that this is a matter of freedom of expression.

Malik’s analysis unnecessarily polarizes a complex subject, taking it as a matter of “respect” rather than lopsided rhetoric against non-platform Muslims.

Like Malik, writer Jill Filipovic also mentions the “delicate sensibilities” of Muslims. Of course, Jill doesn’t come out and mention Muslims. What she says is:

Rushdie made no apologies for creating art that offended the delicate sensibilities of religious people who can’t seem to let God handle his own business.

Filipovic mentions conservative Christians in the United States trying to ban the books. And she argues that the right to offend matters even when those offended are religious. She says:

Religion is a belief system. If yours does not stand up to criticism, questioning, even mockery or insult – if you need to threaten or punish, to the death, those who insult an idea you hold dear – it may be worth asking yourself if your beliefs are as strong as you think they are.

The fact is that conservative Christians simply believe they are being persecuted, while Muslims actually are. The problem with Malik and Filipovic’s arguments is that they make sense in isolation, but not in context.

Islamophobia is a punitive world order that existed long before Rushdie or 9/11. The fact that Muslims are considered a homogeneous group remains an age-old problem. There also remains an issue that Islamophobia does not factor into the analysis of liberal proponents of free speech. The missing context here is that Rushdie and his followers so often go on in their criticism of opposition to Satanic verses.

It is deeply dishonest to claim that Muslims have not had to sit up and accept criticism of many aspects of Islam – repeatedly and consistently. We shouldn’t have to affirm Rushdie’s right to say whatever he wants just to avoid being seen as extremist and conservative Muslims opposed to free speech.

Rushdie’s list of supporters is also revealing. Margaret Atwood wrote in favor of Rushdie and implored the world to “support him“. When you have the likes of Atwood, JK Rowling and Stephen King supporting you, and opinion pieces singing your praises in the Independent, CNN and Spectatoryou clearly have establishment support.

This discussion around free speech is unfolding with token stand-ins – Rushdie is in the western corner, like a wry free-speech martyr. In the eastern corner you have the easily offended, quickly triggered and creeping mass of Muslims. Which Muslims? All? Some of them? The extremes” ? Don’t worry, they’re just Muslims.

Walk in transphobic Hadley Freeman. Describing a conversation with Rushdie himself, Freeman writes:

He [Rushdie] hates how the fatwa shaped perceptions of him as much as he resented how it shrunk his life as he lived in hiding for a decade. “It destroys my individuality as a person and as a writer. I am not a geopolitical entity. I am someone who writes in a play,” he tells me. So, with great determination and courage , he has retained his individuality by choosing freedom, with all the risks that entails.

Rushdie has become a symbol. And, people like Freeman are determined to keep him that way – whether he likes it or not. Freeman cites a speech given by Rushdie in 2005, titled “Defend the Right to Be Offended”, which does what it says on the box. Freeman writes:

It’s not a very fashionable argument now, when Rowling’s name is now seen as analogous to Voldemort in progressive circles, and comedians such as Chris Rock and Dave Chappelle are physically attacked on stage because someone was offended by something they said.

The abandonment of the name of JK Rowling is not a coincidence either. Rowling happens to be a toxic leader of censorship debates. And silence, cancellation and censorship have become watchwords in the war of cultures that is being waged by traditional commentators. Rushdie, the man, was attacked. Rushdie, the symbol, has become synonymous with resistance to censorship.

A typically incendiary introduction to the Daily Mail brought together these problems:

Expensive @DailyMailUK it incites hatred against the trans community, it is dangerous and irresponsible.
I’m actually shocked that you dare to do this, and not putting a name to it is even more telling. pic.twitter.com/BA1Kvyc1aP

Frustratingly, Rushdie’s supporters often deliberately bypass Muslims caught up in this culture war. It is convenient for establishment commentators to align ‘Islamist fundamentalists’ with ‘trans right-wing extremists’. But it raises the question that if you’re all for free speech, then what’s the deal with Muslims expressing their dissent nonviolently? What’s wrong with trans people who just exist? What’s wrong with Muslim trans people, shock, horror, doing both?

Establishment figures would rather Muslims and trans people didn’t exist. The intersection of Islamophobia and transphobia highlights the outright dominance of white supremacy and cis-gender norms. Although Salman Rushdie undoubtedly deserves to be free from persecution and physical attack, that is not the discussion here.

We need to be able to see who the powerful support and why. Rushdie has become the symbol of freedom of expression. But it is simply not true that this freedom of expression is available to everyone in equal measure. Muslims are, once again, caught in the crossfire, as all these commentators on ‘sensitivities’ and ‘limits of tolerance’ sound like preventive propaganda chewed up and spit out as op-eds in the newspaper. . Guardian.