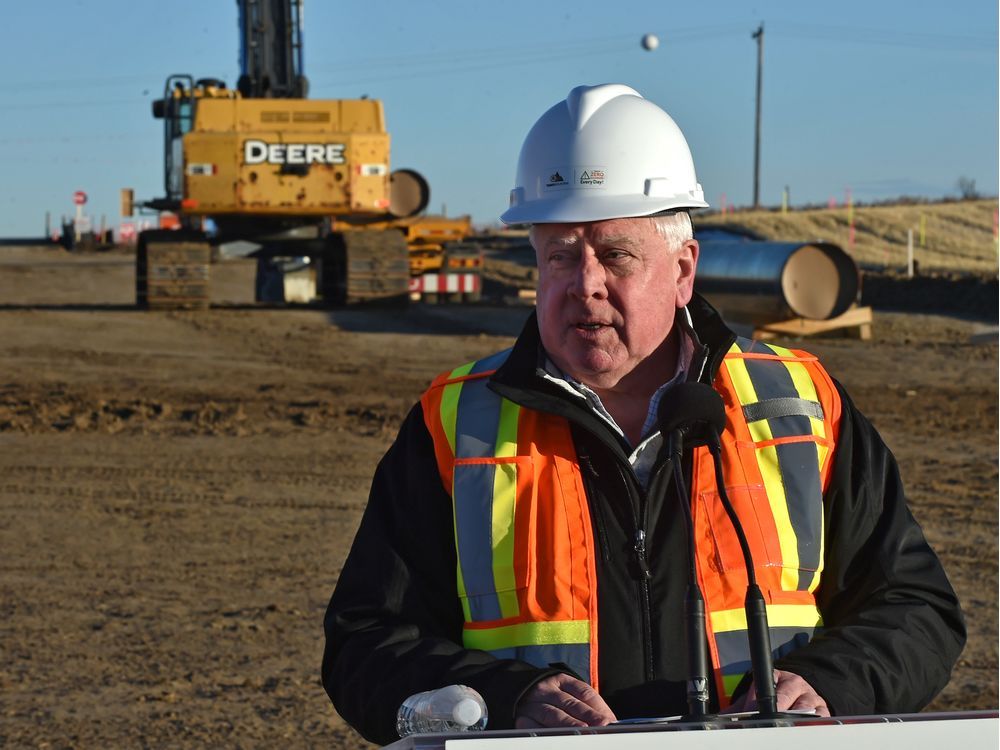 Ian Anderson is finishing his term as chief executive of Trans Mountain Corp., preparing to retire at the end of next week.

After more than a decade working on a project to expand the company’s pipeline, he remains confident that the federally-owned development will be complete – and profitable – for Canadians, even with soaring prices and the timing of construction slipping again.

“There’s no question that when costs go up, the ultimate returns to the investor go down,” Anderson said in an interview.

“Returns go down, but they don’t go down to a point where the project isn’t feasible, viable, or a prudent investment of any kind.”

Anderson also believes geopolitical tensions and concerns about energy security in today’s world have “reinforced the need for the project.”

What is less certain is Canada’s ability to build another major pipeline, given the odyssey of Trans Mountain’s expansion. The journey has included lawsuits, environmental and political opposition, regulatory delays, the pandemic, and extreme construction weather disruptions.

“Someone once joked that the last thing that could happen would be crickets,” Anderson added. “It has truly been a journey of extremes.”

These extremes were highlighted last month by news that the price of the project had soared to $21.4 billion.

The planned completion of the development has also been extended to the third quarter of 2023, instead of the end of 2022.

What hasn’t changed is Anderson’s faith in the logic to get it built.

The expansion will nearly triple the capacity of the existing pipeline, shipping 890,000 barrels per day of oil and refined products from the Edmonton area to a terminal in Burnaby, British Columbia, for export.

Ottawa bought the pipeline from Kinder Morgan in 2018 for $4.4 billion and intends to sell it once the project is significantly de-risked.

However, critics question the underlying economics of the expansion and the Trudeau government’s decision to acquire the development after the private owners were set to leave.

In an interview Monday, Giroux noted that an analysis conducted by his office in 2020 determined that a 10% increase in construction costs would reduce the profitability of the project by about $400 million.

“If we assume there will be no change in the use of the pipeline, I think it’s fair to say that it clearly won’t be profitable,” he said.

“That’s not to say the government wasn’t justified in buying the pipeline…it doesn’t take into account the larger goals of making sure Canadian oil can get to market and can fetch a better price.

Increasing market access for western Canadian oil has always been a primary goal of the 68-year-old pipeline expansion.

Anderson disputes any notion that the project will be a money loser, noting that Trans Mountain has dedicated long-term shippers who have contracted for 80% of its capacity and they remain on board.

“No impairment is expected and we expect Canada to be able to (sell) this business in the future for a good return,” he said.

“All the market analysis we’ve done…has reinforced our assumption that the pipe will be full and will stay that way for a long time.”

What is indisputable is that the construction costs and schedule have changed due to many factors.

Fundraising expenses jumped $1.7 billion as delays and higher costs piled up, according to the federal Crown corporation. Planning pressures pushed the tab up $2.6 billion, while project improvements contributed $2.3 billion.

Another $1.7 billion increase is due to the impact of the pandemic, some decline in contractor productivity levels and extreme weather conditions, including last year’s flooding in British Columbia.

Anderson pointed out that about 20 to 25 percent of cost increases will be passed on to shippers through toll charges, which will add about 80 to 90 cents per barrel.

However, the project will achieve “high single-digit returns, which are consistent with other regulated projects in this country,” he said.

Giroux said he hoped Anderson was right about the project’s financial outlook, “for the sake of the taxpayers.”

Concerns about the security of energy supply have resurfaced recently with Russia’s invasion of Ukraine and the surge in world oil prices.

But does this change the equation for any future pipeline to be built in Canada?

“Ultimately it will be a matter of supply and demand. My judgment would be, in the absence of geopolitical decisions to build more, this could be the last.

Energy economist Peter Tertzakian believes recent events have reinforced the importance of energy security and the strategic rationale for Trans Mountain’s expansion. This will allow Canada to move more oil to international markets through its own territory.

However, he does not see the likelihood of a major pipeline being built in the country changing.

“But we shouldn’t underestimate Canada’s production capacity. We are the fourth largest oil and gas producer in the world. »

Construction of the Trans Mountain project is just over 50% complete.

Anderson, whose retirement was announced the same day as the new cost estimate, will watch the project enter the home stretch from the sidelines.

As for his future, Anderson, 64, said he remains interested in issues important to Canada, including the country’s energy transition and Indigenous reconciliation.

“I still have one thing in me; I don’t know exactly what it will be,” he added.

“I’m not hanging up my skates yet.”

Chris Varcoe is a columnist for the Calgary Herald.

Sign up to receive daily news from the Calgary Herald, a division of Postmedia Network Inc.

Thank you for your registration!

A welcome email is on the way. If you don’t see it, please check your spam folder.

The next issue of Calgary Herald Headline News will soon be in your inbox.

We encountered a problem during your registration. Try Again

Putting equality firmly at the center of the big picture: European Hockey Federation