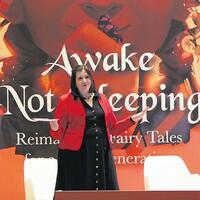 The UN Women Regional Office for Europe and Central Asia has launched its new creative writing initiative, which aims to change the way societies perceive the role of women and girls in public by rewriting 28 tales from fairies at an event in Istanbul.

The initiative, featuring fairy tales created by 31 writers across Europe, was called “Awake Not Sleeping: Reimagining fairy tales for a new generation”.

The event brought together feminist writers, celebrities, theater artists, civil society representatives and children to discuss the role of fairy tales in challenging gender stereotypes and making equal genres a lived reality for all.

The event was held in a hybrid format in person and online at MEF International Schools in Istanbul, Turkey, and streamed live on UN Women Europe and Central Asia Facebook channels in English and Russian.

“UN Women is leading actions across the region to advance gender equality for girls and women, and for boys and men, in their minds, homes and communities,” said Alia El-Yassir , UN Women Regional Director for Europe and Central Asia.

“We believe in the power of storytelling and hope ‘Awake Not Sleeping’ will spark the imagination and stimulate children, youth, families and communities to speak out and take action against gender inequalities,” a- she added.

“If stories change, the world will be transformed,” said Elvan Tongal, Deputy Director General of MEF International Schools, during his welcome speech.

“When I was a child, we had six volumes of popular and fairy tale books at home. I was so impressed with the stories that I read them over and over again during my childhood, always imagining what I would have done differently if I had been able to become a character in the stories, ”said Kalina Maleska, writer of North Macedonia and author of “The Child Without Golden Hair.”

“Stories and their conscious analysis can potentially help promote solidarity, gender equality, understanding and appreciation of the views of others,” noted Tania Kasian, Ukrainian writer and author of “The Sleeping Castle” .

“I believe that fairy tales play a huge role in our life. They form those role models that transform our stereotypes and attitudes towards people and situations. I want every girl and boy to know that he or she has to protect his or her own limits, ”she added.

UN Women has invited celebrities from around the world to support the initiative.

Turkish actress Özge Özpirinçci read the fairy tale “Snow” live on stage.
Manizha Sangin, Russian-Tajik singer and Goodwill Ambassador for the United Nations Refugee Agency (UNHCR) of Russia, virtually joined the event and read an excerpt from one of the fairy tales .

“The reimagined stories of ‘The Awake Not Sleeping’ will spark your curiosity about how fairy tales can create a better world with gender equality and respectful relationships between us,” said Sangin, who is also the co -founder of the SilSila Foundation which fights against domestic violence. among refugee families.

“I encourage everyone to read these reimagined fairy tales and help make the world a better place for women and girls,” Turkish actor and producer Kerem Bürsin said in a video message.

The ‘Awake Not Sleeping’ launch event brought together over 4,600 people from around the world in a mostly virtual format to support a new and creative dialogue for the rapid advancement of gender justice.