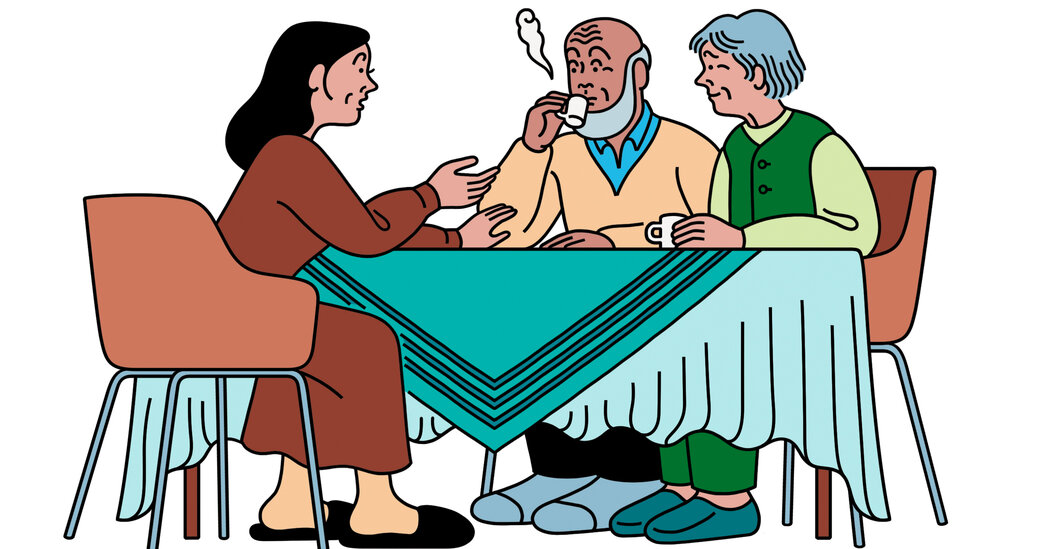 Should I tell my elderly Turkish father that his grandson is trans?

Every time I visit my mother-in-law, I become obsessed with worrying about her. She is in her 60s but has numerous health issues, including near-constant urinary tract infections and fatty liver disease. Despite this, she drinks almost every night. I don’t know how much because she’s not very open, but a few years ago she was bedridden and asked my husband and me to buy her alcohol. She drank about two to three servings of hard liquor a night.

She has had several falls and car accidents as well as episodes that appear to be related to dementia. Recently, for example, she was driving so erratically on the freeway that two people ganged up to pull her off the road. When they confronted her, she was so disoriented that they called an ambulance and the cops. Nothing was found medically wrong with her, and although she was slurring her words and unable to keep her balance, the cop didn’t smell alcohol on her, so he didn’t test her. . He called a relative who lived nearby because he didn’t think she was safe to drive. A few weeks later, she had another accident which luckily didn’t involve anyone else. She does not seem to remember either of these incidents. She later found out she had a UTI and blames him for her confusion.

My husband and I live in another city, but we came to visit him after hearing about these incidents. Since we’ve been here, her mother appears to be in good mental and physical health, but she hasn’t been forthright about any of the traffic accidents. And recently, when she came to pick us up in the car, she seemed very drunk – talkative and unhinged and slurring her words. My husband thinks these are the effects of a current UTI which she is not treating properly. Either way, she probably shouldn’t have driven, and I took over the driving once she arrived.

My husband has a more patient approach of wanting to listen to his mother and gently push her toward healthier choices. I’m getting more and more exasperated and want to confront her about her drinking and how it’s affecting her health. After all of her falls, she’s had very difficult recoveries in the hospital, and I can’t help but wonder if some of them are withdrawal symptoms. Should I respect my husband’s wishes and let him handle it? Or should I push to confront the elephant in the room and give her the treatment she needs but doesn’t want? Masked name

You refer to the treatment she needs, so let me point out that you can’t be sure what needs to be treated. Does she have a drinking problem? Has she suffered from delirium induced by a urinary tract infection, hepatic or uremic encephalopathy, a series of mini-strokes? Is it the onset of a neurodegenerative disease, such as vascular dementia or Alzheimer’s disease? Is it a combination of these conditions? Another problem?

What you can be more confident about is that Something has a problem with her and she shouldn’t be driving. She should get a proper workup to see if she has a neurological problem (which may or may not be related to her fatty liver disease). Dealing with this possibility, like dealing with a drinking problem, can be more difficult than going from one crisis to another. You and your husband must decide together what is the most effective way to achieve this goal. Point out to her that her mother’s conduct puts her and others in grave danger, and that this matter is too urgent to be dealt with simply by nudging.