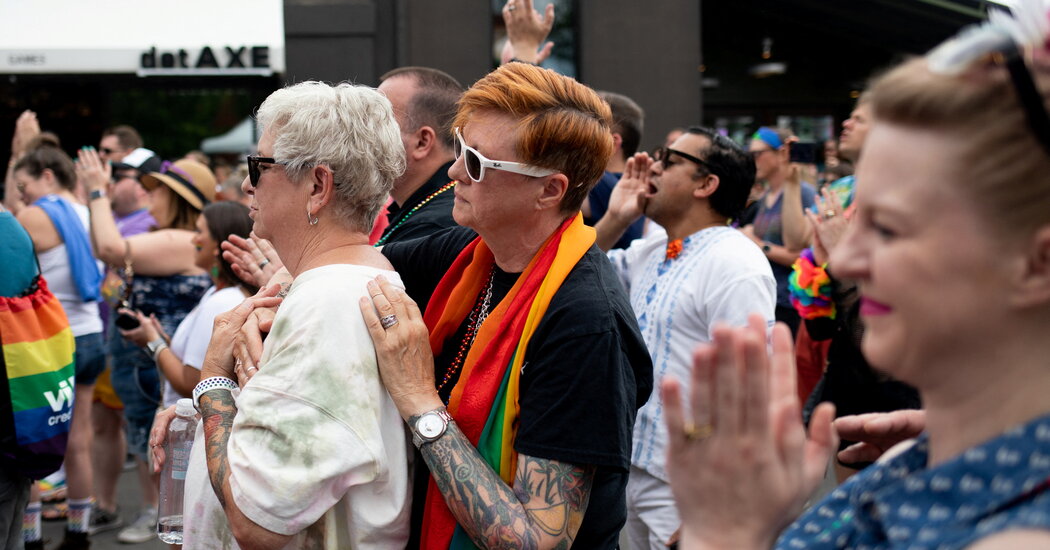 Days after the Supreme Court struck down abortion rights, Michigan’s Republican gubernatorial candidates have been asked if it’s also time to roll back constitutional protections for gay rights.

None of the five candidates took up the defense of same-sex marriage.

“They have to review everything,” said one candidate, Garrett Soldano, during the debate, in Warren, Michigan.

“The Michigan constitution,” said another candidate, Ralph Rebandt, “says that for the good of society, marriage is between a man and a woman.”

Since last month’s Supreme Court decision overturning Roe v. Wade, the anti-gay rhetoric and calls to roll back established LGBTQ protections grew bolder. And while Republicans in Congress appear deeply divided on same-sex marriage — nearly 50 House Republicans joined Democrats on Tuesday in supporting a bill that would recognize same-sex marriages at the federal level — many Republican officials and candidates across the country have made attacking gay and transgender rights a party norm this midterm season.

In Texas, Attorney General Ken Paxton said after Roe’s reversal that he would be “willing and able” defend before the Supreme Court any law criminalizing sodomy enacted by the legislator. Prior to this, the Texas Republican Party adopted a platform that calls homosexuality an “abnormal lifestyle choice.”

In Utah, Republican President of the State Senate, Stuart Adams, said he would support his state joins others in lobbying the Supreme Court to strike down the right of same-sex couples to marry. In Arizona, Donald J. Trump-backed gubernatorial candidate Kari Lake said in a June 29 debate his support for a bill banning children from doing drag shows – the latest target of supercharged rhetoric from the right.

And in the race for governor of Michigan, Mr. Soldano released an advertisement belittling the use of specific pronouns by those who don’t conform to traditional gender roles (“My pronouns: conservative/patriot”) and accusing “the woke groomer mafia” of wanting to indoctrinate children.

Some Democrats and LGBTQ community advocates say the Republican attacks have heightened concerns that Roe’s overthrow could undermine other cases based on the same legal basis — the Fourteenth Amendment’s right to privacy — and lead to an increase in hate crimes as well as suicides of LGBTQ youth.

Key themes from the 2022 midterm elections so far

The state of the mid-terms. We are now halfway through this year’s midterm primary season, and some key insights and questions have begun to emerge from the results. Here’s a look at what we’ve learned so far:

“The dominoes have started falling, and they won’t stop at just one,” said Michigan Attorney General Dana Nessel, a Democrat who was the first openly gay person elected to statewide office. “People should see the connection between reproductive rights, LGBTQ rights, women’s rights, interracial marriage — these things are all legally connected.”

This year, Republican-led states have already passed numerous restrictions on transgender youth and on school discussions of sexual orientation and gender.

In June, Louisiana became the 18th state, all with GOP-led legislatures, to ban transgender students from playing on sports teams that match their gender identity. Laws banning the transition of medical treatments for people under 18, such as puberty blockers, hormones and surgeries — which advocates call gender-affirming care — have been enacted by four states. And after Governor Ron DeSantis of Florida signed legislation in March banning classroom discussions of sexual orientation and gender identity in the early years, more than a dozen other states moved to imitate him.

In total, more than 300 bills aimed at restricting LGBTQ rights have been introduced this year in 23 states, according to the human rights campaignthe nation’s largest LGBTQ advocacy organization.

The bills under consideration do not focus on same-sex marriage but on transgender youth, the restriction of school programs and the ability for groups to deny services to LGBTQ people because of their religious faith. Most of the measures have no chance of passing due to opposition from Democrats and moderate Republicans.

Yet the Human Rights Campaign had characterized 2021 as the worst year in recent history for anti-LGBTQ laws after states passed seven measures banning transgender athletes from playing on sports teams that match their gender. their gender identity. So far in 2022, those numbers are already higher.

The officials and television commentators on the right have accused opponents of some of these new restrictions of seeking to “sexualize” or “groom” children. Grooming refers to the tactics used by sexual predators to manipulate their victims, but it has been widely written about the right to label gay and transgender people as child molesters, evoking an earlier era of homophobia.

Some conservative advocacy groups that have dedicated resources to transgender restrictions insist they are not focused on challenging the 2015 Supreme Court ruling on same-sex marriage. But many LGBTQ advocates say they believe their hard-won rights are under attack.

“The far right is emboldened like it hasn’t been in five decades,” said State Rep. Daniel Hernandez Jr. of Arizona, a Democrat and co-founder of the Legislative Assembly’s LGBTQ caucus. “On top of trying to create even more restrictions on abortion, they’re going after the LGBTQ community even more.”

They said the issues had the power to alienate centrist voters, who polls show are less committed to transgender rights than to same-sex marriage. A Washington Post-University of Maryland investigation in May, 55% of Americans oppose transgender girls competing on high school girls’ teams. In a Gallup poll last year, 51% of Americans said changing gender was “morally wrong”.

“I think these are huge issues for swing voters and moderates,” said Terry Schilling, president of the American Principles Project, a group that opposes civil rights protections for LGBTQ people and plans to spend up to $12 million on ads before November.

One of group announcements lashes out at Rep. Peter Meijer, a Michigan Republican facing a major challenge next month, for co-sponsoring a Internal invoice which combines anti-discrimination protections for LGBTQ people with exemptions for religious groups. Saying the bill would “put men in girls’ locker rooms,” the ad asks, “Do you want to trust Meijer with your daughter?”

In contrast, Governor Tom Wolf of Pennsylvania, a Democrat, said “hate has no place” in the state after he vetoed an anti-transgender sports bill. If it had become law, he said, the ban would have “a devastating impact on a vulnerable population already at greater risk of bullying and depression.”

A 2022 investigation by the Trevor Project, a suicide prevention group, found that nearly one in five transgender or gender non-conforming youth had attempted suicide in the past year. LGBTQ youth who feel accepted in their schools and community have reported lower rates of suicide attempts.

The skyrocketing transgender restrictions reflect a reversal of fortune for social conservatives just a few years ago, when the focus on “bathroom bills” produced a backlash. A North Carolina law passed in 2016 requiring people to use public restrooms matching their birth gender helped defeat the Republican governor who signed it.

“It’s made a lot of people wary of advocating for transgender rights,” said Gillian Branstetter, communications strategist for the ACLU who is transgender.

But that changed with the focus on sports teams and transitional medicine for minors, she said.

On the right, transgender restrictions have been pushed by advocacy groups that have long opposed LGBTQ rights and, in some cases, consulted when the legislation was drafted. And on the left, the flurry of legislation has been used by liberal organizations to mobilize their base, raise funds and help push through midterm primaries in a national political climate hostile to Democrats.

In Arizona, where Republicans control the Legislature and the governor’s office, a law signed into law this year bars trans girls from competing on sports teams aligned with their gender and under-18 surgical transition.

“My colleagues on the right have spent more time demonizing me and the LGBTQ community than I have ever seen,” said Mr. Hernandez, the state representative, who is running for the Democratic primary. for Congress on August 2 in a Tucson- area headquarters.

In Arizona’s primary for governor, Ms Lake, the Trump-endorsed candidate who is leading in some polls, lashed out at a recent uproar over drag performers – in response to a viral video of ‘kids at a drag show in Dallas – to demonstrate his right-shift sharpness.

“They kicked God out of the schools and took in the Drag Queens,” Ms Lake said in a Tweeter last month. “They removed our flag and replaced it with a rainbow.” And the Republican leaders of the Arizona Legislative Assembly, denouncing “sexual perversion”, demanded a law banning children from drag shows.

But a drag performer in Phoenix, Rick Stevens, accused Ms Lake, who he said had been a friend for years, of hypocrisy. “I’ve played for Kari’s birthday, I’ve played at her house (with kids in attendance) and I’ve played for her in some of the seedier bars in Phoenix,” he said. wrote on Instagram.

Mr Stevens, who goes by the name Barbra Seville, posted photos of the two of them together – one with Ms Lake next to him while dressed in drag, and another when he is in drag and wearing a skull Halloween-style. makeup as she poses beside him dressed as Elvis.

During a debate, Ms Lake insisted Mr Stevens was lying about performing at her house and her campaign threatened to sue him for defamation.

In Michigan, meanwhile, Ms. Nessel, the Democratic attorney general, joked at a civil rights conference in June that drag queens “make everything better” and added: “A drag queen for every school”. In response, Tudor Dixon, Republican gubernatorial candidate, called this month for legislation allowing parents to sue school districts that hold drag shows, although there is no evidence that any district has ever done so.

“Today we are taking the first step to protect children,” Ms Dixon said.