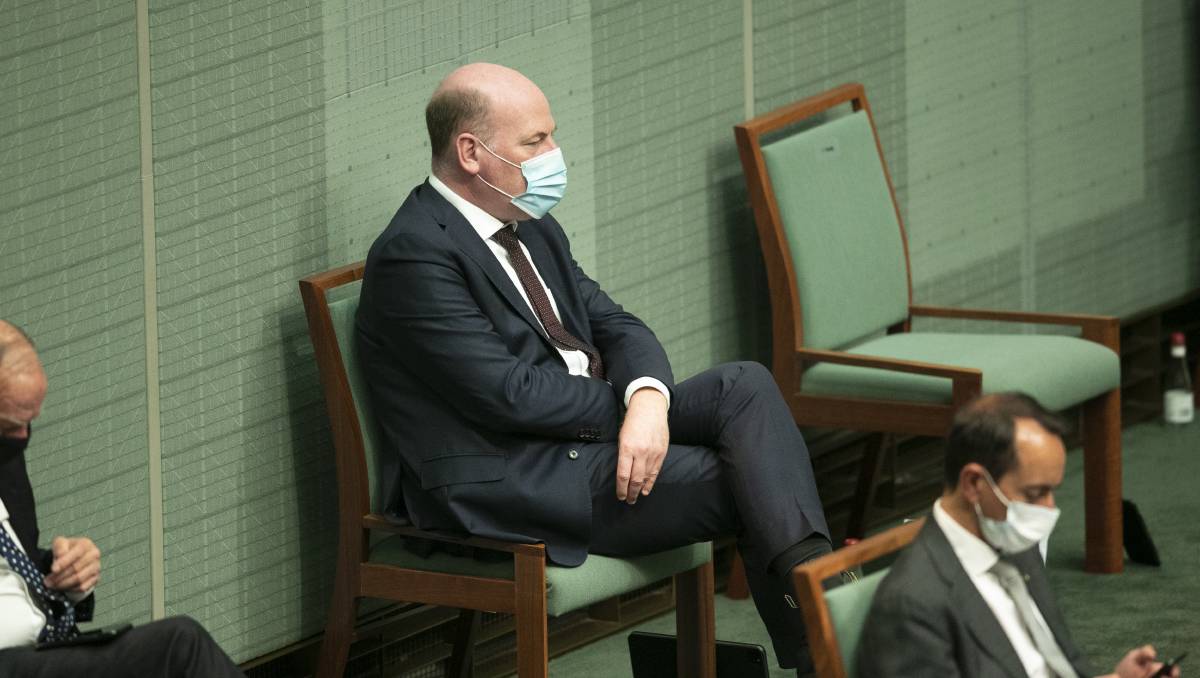 A Liberal backbench MP is set to cross the floor in support of Labor’s amendments to the Religious Discrimination Bill, saying he ‘couldn’t live with myself’ if he didn’t did not intervene.

North Sydney MP Trent Zimmerman revealed his position in a moving speech during the debate on the bill.

Parliament sits late Wednesday night to decide the fate of the Religious Discrimination Bill in the lower house.

Labor is pushing for major changes to fix the Bill’s ‘big flaws’, a stance which raised the prospect of a stalemate over Scott Morrison’s key pledge during the final sitting of Parliament days before the federal elections.

The opposition has pledged to try to amend rather than oppose the controversial bill, which has revealed internal division within the two main parties.

The Labor caucus agreed on Wednesday to push for major changes to the bill, including a significant watering down of the controversial “statement of belief” clause and extending immediate protections to transgender students in faith-based schools.

It will also seek to ban religious defamation and clarify that aged-at-home service providers cannot discriminate on the basis of religion during care.

Labor leader Anthony Albanese said the debate over religious discrimination should have been about ‘strengthening national unity and bringing people together’, but the Government’s ‘flawed bill does not do that’.

“This legislation is flawed but we want to fix it,” Mr. Albanese said in a speech to the House of Representatives as debate on the bill resumed late Wednesday afternoon.

Mr. Zimmerman, who had reserved the right to cross the room, gave a speech late Wednesday evening to express his concerns about the declaration of belief clause and the narrow scope of the proposed changes to the sex discrimination law.

The government plans to change the law to protect gay students from discrimination in faith-based schools, but will not extend the same protections to transgender students.

Labor supports scrapping the right of religious schools to discriminate against gay teachers, but will not push for change until the Australian Law Reform Review Commission considers it.

In his speech, Mr Zimmerman said he wanted to go even further than Labor when he said the current debate presented a ‘historic opportunity’ to right what he saw as a ‘significant falsehood’ in sex discrimination law.

“It’s in relation to his treatment of teachers and students,” he said.

“The current SDA provides that a person can indeed be discriminated against on the basis of inherent characteristics, such as their sexuality, gender, sex, pregnancy, marital status.

“To me, that’s fundamentally wrong. These are exemptions that belong in the 19th century, not the 21st century.”

Mr Zimmerman, who is gay, said he had made the ‘difficult decision’ to ‘break away’ from the Government’s position and back some amendments.

“It’s an opportunity I can’t pass up,” he said.

“I couldn’t live with myself if I didn’t try to solve these problems.”

Equality Australia has welcomed Labor’s changes to the statement of belief clause, saying it will ensure existing protections for marginalized groups are maintained.

But the advocacy group wants Labor to go further and immediately protect gay teachers and staff in faith-based schools from discrimination.

The Australian Christian Lobby criticized the Labor Party’s stance, saying it would not back the government’s bill if it was “emptied” by opposition amendments.

Labor has proposed its package of amendments in the lower house, but will not oppose the bill if it does not pass.

Canberra MP Alicia Payne was among Labor backbenchers who pushed unsuccessfully at Wednesday’s caucus meeting for the opposition to pledge to vote against the bill if its amendments were rejected.

Labor is confident that once the bill reaches the Senate it will have the numbers needed to change the government’s signature policy.

If the government opposes changes to its bill, Labor will ‘insist’ on them staying, potentially creating a stalemate that would only be broken if one side backed down.

Time is already running out to pass the bill, with the Senate expected to sit only three more times before the likely election in May.

The Morrison government continues to face the prospect of an internal revolt against the bill, despite winning the Coalition party room’s approval after marathon meetings on Tuesday.

Our reporters work hard to provide local, up-to-date news to the community. Here’s how you can continue to access our trusted content:

This “I couldn’t live with myself” story: A Liberal to cross the floor on a religious discrimination bill first appeared on The Canberra Times.