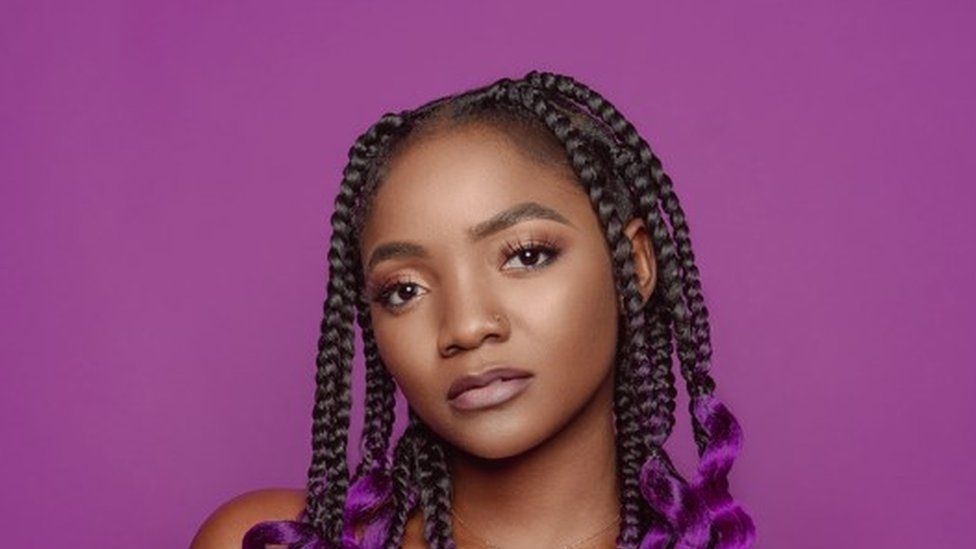 It provided a safe space for stars and other women to share their experiences of discrimination.

They tended to post black and white photos of themselves, scribbled with the words of their detractors, like, “She’s a mother, she should stay home,” “Why does she go out at night so is she not a prostitute? “and” Why aren’t you married yet? “

Simi told the BBC she cried as she walked past one of the hash tagged posts on her social media feed.

It was about a woman who had been mocked for having had four Cesarean sections – when a baby is delivered by making a surgical incision in the abdomen and uterus.

People wondered why she couldn’t give birth naturally.

She said the comments were harsh: “’She’s not good. Imagine that she couldn’t even have your children naturally. They had to do a Caesarean for her and she still lost one of her children. It’s so traumatic. “

The 33-year-old singer said she wanted to launch the campaign to make women understand that they were “not alone” in their struggles – it coincided with the release of her new song Woman.

But the flood of women who took to the hashtag to share their experiences of sexism and discrimination both in their careers and in their personal lives came as a surprise.

A photo of Simi with the words: “How can she ask for that kind of money, isn’t she pregnant?” painted on his back started it all.

As a famous artist in Africa and beyond, Simi said it sums up the sexism she has faced within her own Afro music industry.

Early in her career, music bosses – usually men – told her she had to be “sexy” and provocative to be successful in her field.

When she did succeed anyway, they were shocked.

There were even people who didn’t want to work with women because they thought they couldn’t function after having children or getting married, she said.

During one incident, she recalled someone wondering why she was charging so much for concert tickets when she was pregnant.

“It was probably an agency,” she said, when asked who was the culprit.

‘Sleep with me to be a star’

“Our culture is not to talk,” the 45-year-old star told the BBC.

She took part in #NobodyLikeWoman with a photo with the caption: “My friend! Go have a child.

Chigul doesn’t have children, but that hasn’t stopped friends and even trolls from asking her when she is going to have a baby.

Her relatives may have had good intentions, but it still hurt, she said.

Over the course of her career, Chigul has said that countless numbers of promising actresses have opened up to her over allegations of sexual misconduct by powerful male movie bosses.

Some of them were told by male directors, “Come and sleep with me, I’ll make you a star. I can get you that role, that role ”– which she says amounts to coercion.

An actress she knows who refused to have sex with a male cinema boss has been reprimanded, she said.

He called her a “child” with little understanding of “adult” affairs.

When asked how many young actresses had confided in her sexual violence, she replied that it was “too much”.

The odds were against the women – most of the time they became the victims, she said.

“It’s just wahala [trouble] at all levels, ”she said.

Chigul and Simi agree that laws in Nigeria need to be tougher on those who discriminate or attack women.

According to UN Women, Nigeria has implemented 75% of the laws needed to advance gender equality, which the UN wants to achieve globally by 2030.

But less than half of the measures needed to monitor the country’s progress towards that goal were in place last year – for example collecting regular statistics on things like the gender pay gap and physical and sexual harassment. .

Justify abuse with the Bible

In her view, Nigerian lawmakers tend to take into account how different religious communities will react to gender equality legislation.

Ms Kelechi-Nwuzi, who is herself a Christian, says this is a problem.

“If there is a way to separate secular society from religious and cultural society, I have a feeling there will be progress,” she told the BBC.

She also puts some of the blame on the Nigerian police.

Most of the cases Ms. Kelechi-Nwuzi covers in her work on women’s rights involve domestic violence, which authorities do not take seriously, she said.

“Often times you will find people quoting the Bible” in an attempt to justify a husband’s violence against his wife, she said.

#NobodyLikeWoman posts tend to be tame compared to the #MeToo movement that swept the world a few years ago when women – especially in Hollywood – started naming those who allegedly sexually assaulted them.

Ms Kelechi-Nwuzi said there could one day be a #MeToo movement in Nigeria, but it would take a woman to lead it who could resist the vitriolic and the “backlash” that would ensue.

However, Simi believes that the struggle for women’s rights in Africa cannot be compared to the efforts in the West.

The situation for women in Africa is much worse because of what she describes as its patriarchal system: “It expects women to curl up and absorb oppression. “

Chigul agrees – given that she says Nigerian women have learned to ‘sweep things under the rug’.