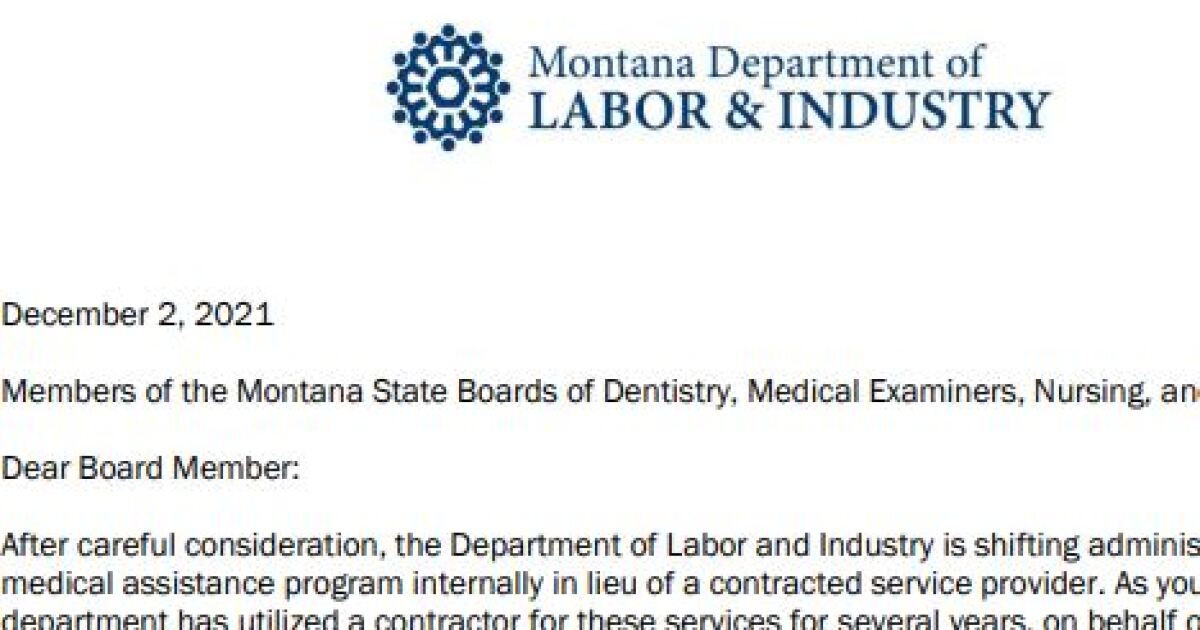 BILLINGS â€” The Montana Department of Labor has announced it will end its contract with a Billings-based nonprofit that helps rehabilitate Montana healthcare workers suffering from drug addiction and addiction.

The announcement came after a ruling in late October in which a Montana Human Rights Bureau investigator said there were reasonable grounds to believe that longtime Montana Assistance Professional Association executive director Mike Ramirez said resorted to gender discrimination and reprisals against three former program staff.

The investigation began in March when former employees Meg McGauley, Amber Roane and Cecilia Zinnikas filed dozens of pages of allegations regarding their boss’s offensive and preferential inappropriate behavior.

Now, from January 1, 2022, the Labor Ministry will move the medical assistance program in-house instead of a contracted service provider, according to the letter.

For several years, the State has contracted with the MPAP for services. Those in the ministry say they plan for a smooth transition, continued support for licensees, protection of the public and efficient use of council resources. The letter also promises board members to provide full follow-up reports to each board.

The plaintiffs in the case told MTN News on Wednesday that hearing the news of the end of the contract seemed surreal.

â€œWe are very happy to hear that the state has moved away from Mr. Ramirez and the behavior he has displayed. This is a really important step in ensuring that medical workers can receive the kind of fair and professional care they deserve, â€Zinnikas said.

The women said in their complaint to the human rights office that Ramirez used underlying discrimination and disparagement based on their gender, and investigator Barry Ivanoff agreed, writing in his ruling that the harassment of the women women was so serious that it created an abusive work environment.

McGauley started her job as the MPAP Clinical Coordinator in 2017. In January 2021, she was fired by Ramirez.

McGauley claims in the investigation that she was fired from her post for exposing Ramirez to the MPAP board after cases of what she says was blatant sex discrimination, among other things.

â€œThe retaliation was clear after we raised, you know, complaints with the board about his discriminatory and abusive behavior,â€ McGauley told MTN News.

All the women eventually lost their jobs.

The women say the program participants were also in a place where they could be victimized by Ramirez.

McGauley previously told MTN News that at a time when healthcare professionals are valued during a deadly pandemic, even they suffer from the same conditions as everyone else and deserve a safe place to go for help.

Now that location won’t be Montana’s professional assistance program, but the state assures board members will be taken care of.

In the letter, business standards division administrator Todd Younkin also said that an internal program would allow for more direct monitoring of participants’ progress with regard to the board’s decision-making process.

In addition, the compliance specialists in this department will take care of oversight while the clinical professionals, working independently of the department, will manage all assessment and treatment processes directly with the participant.

The letter does not specifically address the ruling against Ramirez. In July, Ministry of Labor officials told MTN News they were aware of the allegations against Ramirez. At that point, they decided to renew their contract with MPAP for an additional six months.

MTN News has repeatedly contacted Ramirez and his legal representative, Billings attorney Calvin Stacey, for comment. At one point in May, Ramirez was reached by phone and directed MTN News to his lawyer. Neither returned phone calls or emails requesting comment on the investigation and ruling.