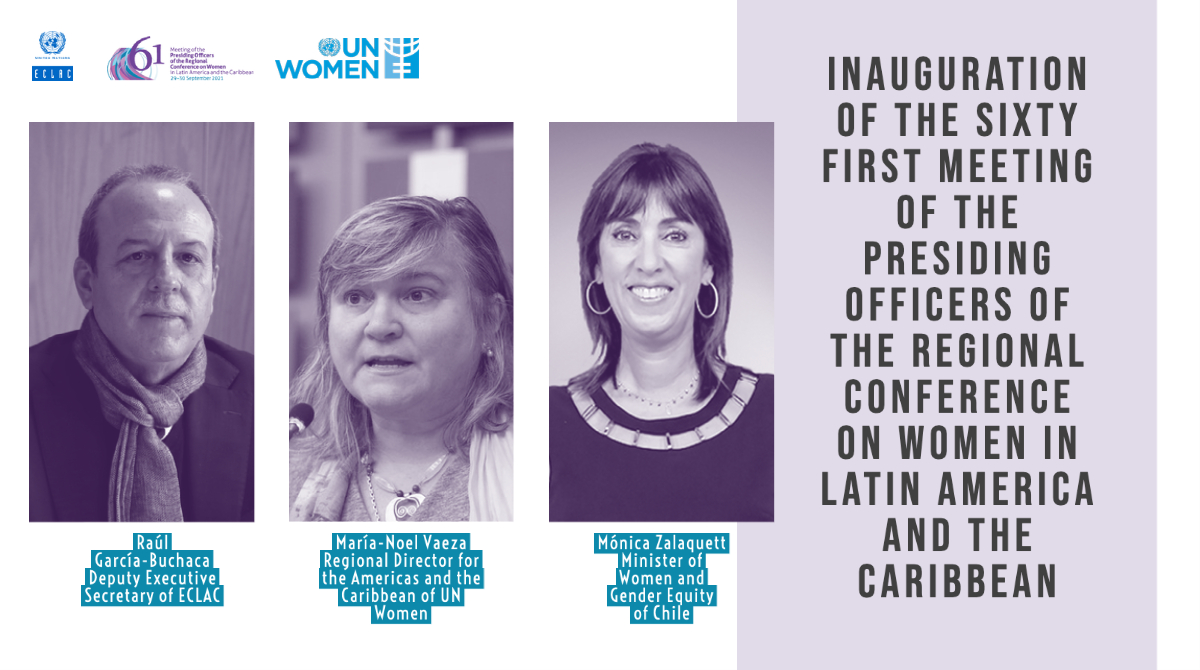 Authorities and representatives of civil society and international organizations attended the first day of the sixty-first meeting of the presidents of the Regional Conference on Women in Latin America and the Caribbean, organized by ECLAC in coordination with UN Women .

Senior government officials as well as representatives of international organizations, universities, women’s and feminist organizations and civil society today issued an urgent appeal to invest in the care economy in Latin America and in the Caribbean, with a focus on creating decent jobs for women, and moving to a caring society to achieve a transformative and sustainable recovery with gender equality in the region, on the first day of the Sixty-first Meeting of Presidents of the Regional Conference on Women in Latin America and the Caribbean, which runs virtually until Thursday, September 30.

The meeting, in which the ministers of the status of women and the authorities of the mechanisms for the advancement of women participate, is organized by the Economic Commission for Latin America and the Caribbean (ECLAC), which provides the technical secretariat of the Conference, in coordination with the United Nations Entity for Gender Equality and the Empowerment of Women (UN Women).

Participants at the opening session included RaÃºl GarcÃ­a-Buchaca, Deputy Executive Secretary of ECLAC for Program Management and Analysis, speaking on behalf of Alicia BÃ¡rcena, Executive Secretary of the regional organization; MarÃ­a-Noel Vaeza, Regional Director for the Americas and the Caribbean, UN Women; and MÃ³nica Zalaquett, Minister of Women’s Affairs and Gender Equity of Chile, in her capacity as Chair of the Presidents of the Regional Conference on Women in Latin America and the Caribbean.

RaÃºl GarcÃ­a-Buchaca pointed out that the COVID-19 crisis has worsened gender inequalities in the region: women are overrepresented in unemployment, work informality, poverty, domestic and care work, and in first line of response to the pandemic in the health sector, he specified.

“It should be noted that 6 out of 10 women in the region are concentrated in high-risk sectors affected by the pandemic, such as industry, commerce, paid domestic work and tourism,” said the representative of the CEPALC, warning that “we are facing a paradox in the recovery: even if there is a 2.2 percentage point increase in the participation rate of women, projections for 2021 estimate that only men will regain levels of employment. pre-crisis, while women will barely reach the activity rate seen in 2008 (49.1%). We will still be at the levels of 13 years ago.

RaÃºl GarcÃ­a-Buchaca called for countries in the region to maintain expansionary fiscal policies and promote a new fiscal pact with gender equality, in order to contain the impact of the crisis on women’s lives and to be able to invest in a strategic and revitalizing sector such as the care economy.

â€œThe care society must be the horizon for a transformative and sustainable recovery with gender equality. We need an urgent change in the development model to move towards a care society in which there is a recognition of the interdependence of people; productive processes and social reproduction; and that puts the sustainability of human life and that of the planet at the center, â€he explained.

MarÃ­a-Noel Vaeza, Regional Director for the Americas and the Caribbean, UN Women, said â€œthe impact of the crisis continues to be evident, as well as the disproportionate consequences for women and girls. That is why we urgently need to mainstream gender equality and the participation of women in all recovery plans, in all decision-making processes aimed at comprehensive solutions to recover from the pandemic, and also to ensure that public policies are put in place that would facilitate the realization of human rights. “

“We, at UN Women and at ECLAC, have insisted on public policies capable of responding to the healthcare crisis, a job that was already disproportionately incumbent on women before the pandemic and in which the gap has widened” , MarÃ­a-Noel Vaeza declared. “We believe that investing in care has a triple dividend: in human capital, in employment and in the participation of women in the world of work,” said the representative of UN Women, adding that she ‘it is about a “new industry” which requires quality jobs in order to leave the informality which characterizes the sector.

In the same vein, Minister MÃ³nica Zalaquett said that “we have witnessed the fragility of the achievements in gender equality which had cost us dearly”, referring to the drop in participation of women and men. women at work, the healthcare crisis and the increase in violence against women.

“If the pandemic has left anything positive, it is because it has highlighted the relevance of care work, historically made invisible, as a cornerstone of our societies,” she said. “It is only by injecting resources into the care economy, which energizes it and ensures its sustainability, that we will be able to overcome the structural constraints of gender inequality and evolve towards a care society”, a- she stressed. In this regard, the Chilean Minister welcomed the Federal healthcare card, an interactive website that connects citizens to the multiple health care services available, both public and private, which was launched by the Government of Argentina in collaboration with ECLAC; and as well as the Global Alliance for Care Work, promoted by the Government of Mexico, through INMUJERES and UN Women, as part of the Generation Equality Forum – among other initiatives led by countries in the region.

Following the opening session, the high-level panel titled â€œTowards a Care Society for Recovery with Gender Equality and Sustainabilityâ€ was held, with the participation of government authorities and representatives of international organizations. , civil society and academia.

During this session, ECLAC presented the working document Towards a care society: the contributions of the regional gender agenda to sustainable development, which calls for accelerating the pace towards economic, climate and gender justice, and for moving towards a care society that prioritizes the sustainability of life and the protection of the planet; guarantee the rights of those in need of care and of those who care for them; fight against the precariousness of jobs in the care sector; and make visible the multiplier effects of the care economy in terms of well-being and as a driving force for a transformative recovery in equality and sustainability.

During the Sixty-first Meeting of Presidents, participants will work on preparations for the Fifteenth Regional Conference on Women in Latin America and the Caribbean, to be held in Argentina in 2022. In addition, they will report on the progress of the Regional Alliance for the Digitization of Women in Latin America and the Caribbean – led by Chile, with technical support from ECLAC and UN Women – and on aspects related to the functioning of the Regional Fund in support of organizations and women’s and feminist movements, among others.