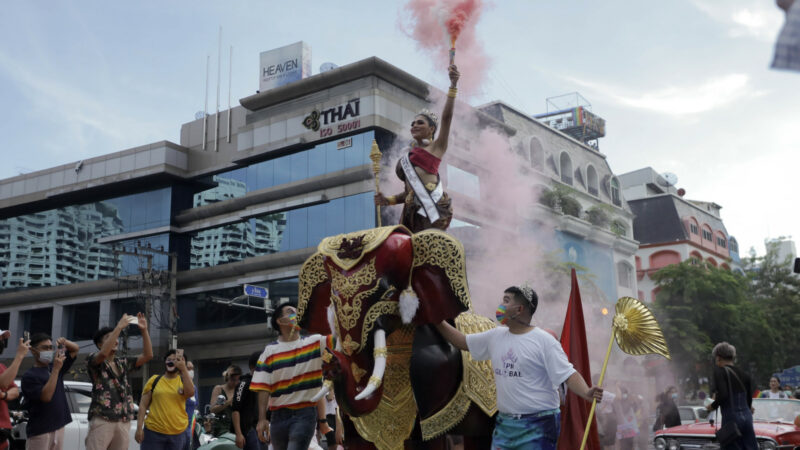 This article by Teeranai Charuvastra was originally published by Prachatai, an independent news site in Thailand, and an edited version is republished by Global Voices under a content-sharing agreement.

After a nearly two-decade hiatus, the Pride Parade returned to Bangkok, Thailand on June 5 with a bang, drawing crowds of members of the LGBTQ+ community, sex workers, feminists, political dissidents and even corporate advocates.

The event was such a success that even its organizers were taken by surprise, they told Prachatai English in an interview. Emboldened by the overwhelming reception, they now aim to expand the fight for gender equality beyond Bangkok by organizing similar Pride campaigns across the country.

In an interview with Prachatai English, the team behind the Pride Parade shared their assessment of the event; how they managed to win such support in a largely conservative Thailand; and how the recent election of Chadchart Sittipunt as Bangkok’s new governor swung public support decisively in their favour.

The “Naruemit” Pride Parade, which means “creation” in Thai, included speeches, drag shows and dance parties throughout the day. No official attendance data was released, but one of the organizers said the event drew around 10,000 attendees.

I felt really proud. It is an enriching experience to know that what we have done has brought our city and its inhabitants back to life. And I was really touched, because I could feel that people were having fun and hoping, proud of the diversity of gender identities.

The parade attracted a wide range of participants, from members of the LGBTQ+ community and their supporters, to women‘s rights activists, foreign tourists, sex workers, same-sex marriage advocates and government critics who used the march to express their political agendas.

There were even politicians, and the most prominent was the newly elected governor of Bankok, Chadchart Sittipunt, who pledged his support for the Pride Parade from the night of his election victory on May 31.

Members of the LGBTQ community and their supporters take part in the Pride march in Bangkok. Photo by Prachatai

The rare, the proud

The diversity celebrated by the June 5 parade was also evident among the organizers.

The planning committee was made up of Bangkokians, from the northeast and the south. One identifies as trans-non-binary, another as intersex, while another uses “ze” as a preferred pronoun. Most have been involved in campaigning for gender equality and LGBTQ+ rights for years, but for some it was their first time hosting an event.

Before that, I was just an outsider. I just signed my name on petitions and retweeted other people’s posts. But now I have seen and learned so much about the details of preparation. It gave me a very good first impression. It’s so different from what I’ve experienced on the outside.

The same opinions were expressed by many organizers: they were pleasantly surprised by the turnout for the parade and the warm reception from the public and the media.

“It was really beyond my expectations. When we started planning, we didn’t know so many people would come marching with us,” said Jingjai Jingjit, a 34-year-old member of Feminist Mermaids, a women’s rights group based in the province. from Songkhla.

Processions and rallies in support of LGBTQ+ rights have taken place in Thailand before, the last one taking place in Bangkok in 2006. But they were either gay parades or events marking the International Day Against Homophobia, Biphobia and transphobia, not like Pride activity tied to June’s Global Pride Month, said Waaddao, an activist who also leads a group called Togetherness for Equality and Action (TEA).

In that sense, she said, the June 5 parade was the first of its kind for the capital. She added that a Pride Parade is not just about gender equality.

This is democracy: we had to take to the streets and demand that our rights be respected. We wanted to practice street democracy.

The first parade planning meeting had “less than 10 people and 0 baht [Thai currency]“recalls Waaddao. Later, the news spread to other groups in the close-knit circle of LGBTQ+ activists and feminists. A total of 400,000 THB (11,350 USD) was raised to fund the parade. Funding came from equality organizations, donations from the public, and proceeds from afterparty ticket sales.

The organizers adopted what they called a “power-sharing” management as opposed to a hierarchical style of management. There was no leader or official spokesperson. During interviews, team members repeatedly emphasized that the parade was a collective effort. For this reason, they also tried to avoid media interviews involving individual representatives of the group.

Team members also attributed the high turnout and public acceptance to the public endorsement given by Governor Chadchart, who attended several events prior to the June 5 parade. Waaddao said:

Chadchart’s support was a critical factor. The Chadchart effect is still strong. It helped mobilize people. Even though Chadchart didn’t organize the parade, he helped make our activity look like it was supported by the city.

With the head of Bangkok’s government hierarchy fully behind the march, support from the authorities quickly followed. On June 5, police cordoned off the march route and directed traffic flows through the heart of Silom district. State officials and medical personnel have also been deployed to provide support.

The result was a rarity in Thailand, where protests are regularly obstructed or violently dispersed.

Even more surprising to Naruemit organizers was the show of solidarity from the private sector, including some of Thailand’s biggest corporations, which are typically reluctant to advocate for civil interests and movements.

A sign calling for the resignation of Prime Minister Prayut Chan-o-cha hangs above the Pride parade in Bangkok. Photo by Prachatai

Organizers say the near-universal support for the march has nonetheless been marred by government hostility. The Ministry of Health has tried to stoke public fears that the monkeypox disease could be spreading in Thailand due to foreign tourists attending the Pride Parade.

The World Health Organization said those fears were unfounded, but that didn’t stop government spokesmen from repeating the warning to the media.

“I wasn’t surprised they were trying to paint us that way. But I was very angry to see it,” said Jingjai, the Feminist Mermaids activist.

Naruemit’s success was enough to encourage organizers to focus on other Pride events outside of Bangkok. They are already planning to hold a march in Hat Yai district of Songkhla province on June 26 and another in Khon Kaen province on June 30.

But expanding the struggle beyond Bangkok comes with its own challenges, including potential resistance from people in more conservative parts of the country. Just 10 years ago, a gay parade in Chiang Mai was forced to cancel after protests from local residents.

Others said they were convinced times had changed and Thailand was now more ready than ever to embrace diversity.

“Of course, I think of the risk. I guess it’s normal that our event is attacked by some people,” Jingjai said. “But we will welcome the parade in a friendly way. I don’t think there will be a big backlash.

She added, “I think Thai people are more and more aware of their rights now.”