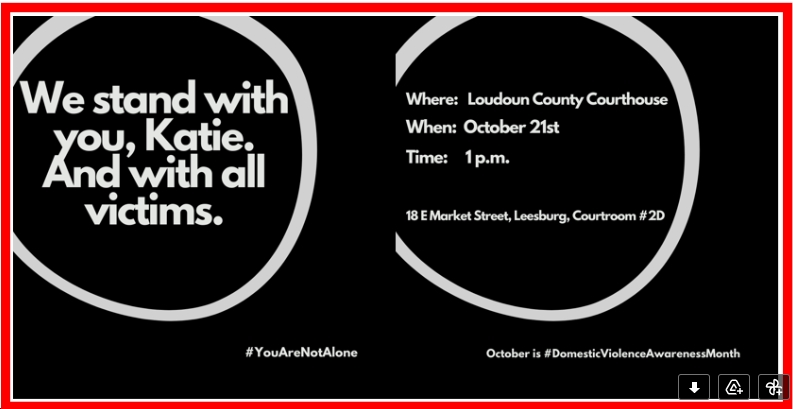 See below for more information – courtesy of the sexual assault survivor and the lawyer Lisa Sales – on what she correctly calls the “American health crisis” of domestic and sexual violence, and in particular the egregious case of the appalling treatment by Loudoun County Judge James Fisher of domestic violence victim Katie Ornsdorf:

“… Loudoun County Circuit Court Judge James Fisher” interrupted [domestic violence survivor Katie] Ornsdorf’s testimony freed the jury …questioned her with a series of questions to which she answered nervously and respectfully, â€thenâ€œ found her in contempt of court for confessing to using a legal substance, cannabis, that morning to calm her feelings down. fears of having to appear before the attacker. The judge ordered six MPs to pick up Ms Ornsdorf, take her out of the courtroom and jail her for 10 days.â€¦Further away, he ordered an assault on Ms Ornsdorf by demanding that her blood be taken against her will after her conviction.

Unfortunately, as the press release explains, the Ornsdorf affair is far from an isolated incident: On the contrary:

“You will see that Judge Fisher presents a pattern of gender discrimination and appears to target women and their lawyers. Of the first six cases presented since Fisher became a judge, all of the actions are against a woman or her lawyer.…[Fisher] brought discredit on the desk and violated the trust of the community and succeeded in dissuading victims of domestic violence and sexual assault from reporting the crimes perpetrated against them.

So, this Thursday 10/21, lawyers will meet at the Loudoun County Courthouse at 1 p.m. to make their voices heard and demand action against this judge and the system that perpetuates the unacceptable behavior described below.