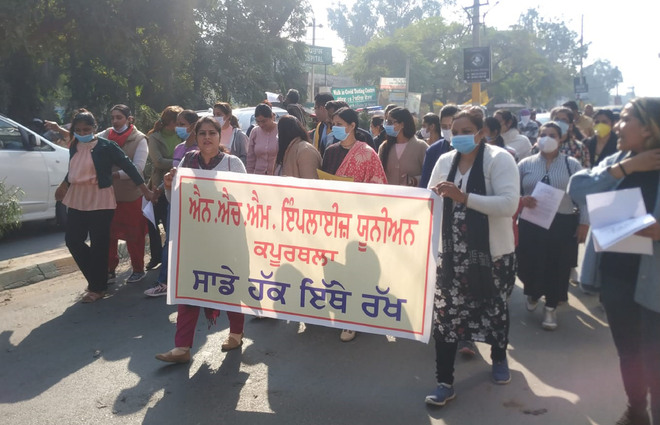 To protest against the policy of the state government, employees of the National Health Mission (NHM) took to the streets on Thursday to demonstrate.

NHM employees in Kapurthala said the government’s statement to regularize 36,000 employees was a big lie. They said that while they risked their lives to expand health services during the Covid-19 pandemic, the government was not rewarding the Covid warriors or heeding their demands.

They said if other states could pay regular pay scales to health workers, which prevented the state government from doing so. Union members distributed leaflets on the government’s â€œfalseâ€ promises and called on them to boycott the government in the upcoming elections. They even urged patients not to subscribe to the government’s lofty demands. They said that if the equal pay and work policy was not implemented, they would continue to intensify their protest. Dr Prabhjot Jabbal, Dr Sanjeev Sharma, Navdeep Kaur and Dr Yogesh, among others, were present on the occasion.

The protest was staged in solidarity with the unrest by NHM workers across the state. Dr Inderjit Singh Rana, head of state of the NHM Employees’ Association in Punjab, said it was the first such government that did not care about its employees or health of the state’s population. These employees of the Ministry of Health’s National Health Mission had long fought for their legitimate demands, but the state government cared little for them.

Dr Rana said that whenever there was a meeting of the association’s representatives with the state government, ministers or senior officials, everyone’s statement was different. The inconsistency in the statements of the Chief Minister, the Minister of Health or senior officials of the Ministry of Health proved that the state government was not serious in solving their problems.

Expressing their views on the same topic, state committee members Jaswinder Kaur and Gurpreet Singh said a massive rally would be held in Amritsar, the hometown of Health Minister OP Soni, which would be an attempt to wake the government from its deep sleep.