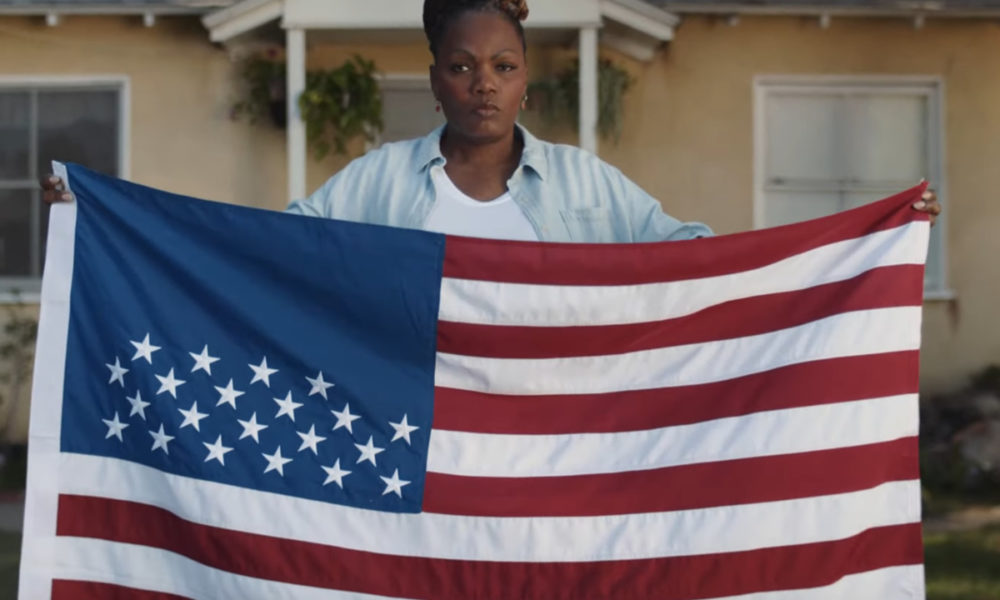 In a Feb. 23 statement, HRC says the campaign will include, among other things, a series of “powerful” social media and TV video ads created by Emmy Award-winning director Joey Soloway, which tell how the LGBTQ people are affected. by discrimination.

At the center of the campaign, as the videos show, is an American flag with 29 of the 50 stars removed to draw attention to the 29 states that lack comprehensive legal protections for LGBTQ people, which the HRC calls the “flag of reality”.

During its official campaign launch on Feb. 23, HRC unveiled an 85-foot-long version of the Reality Flag on the exterior wall of its DC headquarters, which HRC says is located just six blocks from the White House.

“The Reality Flag campaign is designed to highlight the inequalities that LGBTQ+ people face every day – in our own voice,” said Joni Madison, Acting Chair of HRC. “From discrimination in housing and education to denial of government and health services, LGBTQ+ people face barriers to simply existing every day,” Madison said in a statement.

“That has to change,” she said. “The Reality Flag not only calls out to the 29 states where basic freedoms are still lacking for millions of people, but represents a symbol of hope that communities can rally together to implement meaningful change.”

The HRC’s Reality Flag campaign comes at a time when most political observers unaffiliated with staunch supporters and opponents of the Equality Act believe the bill has no chance of passing the US Senate anytime soon. , even though it passed the United States House in February 2021 by a vote of 224 to 206. In the House vote, only three Republicans joined the 221 Democrats in voting for the measure.

Observers note that although Democrats have a slim Republican Senate majority of 50 Democrats-50 with Vice President Kamala Harris poised to break a tie vote in favor of Democrats, the longstanding Senate filibuster rule that Democrats can’t change means the Equality Act needs a 60-vote majority to pass.

Forty-nine of 50 Senate Democrats have signed on as co-sponsors of the Equality Act. Maverick Democratic Senator Joe Manchin of West Virginia has become the only Senate Democrat to say he cannot support the Equality Act as it currently stands due, in part, to what Manchin says is its provisions for transgender non-discrimination in school sports and the use of school toilets.

Sources familiar with the Senate told the Washington Blade last May that even if the filibuster rule were eliminated, other Democratic senators from swing states would likely join Manchin in refusing to support the equality law. due to efforts by some Republicans to turn transgender rights into an inflammatory corner issue.

The official Congress website Congress.gov states that the Equality Act calls for prohibiting “discrimination on the basis of sex, sexual orientation and gender identity in areas such as public housing and facilities, ‘education, federal funding, employment, housing, credit and the jury system’. .”

The Congress.gov site adds, “The bill prohibits an individual from being denied access to a shared facility, including restrooms, locker rooms, and locker rooms, that is consistent with the gender identity of the individual. ‘individual.”

Several moderate GOP senators, including Sen. Susan Collins (R-Maine), have said they support the principle of freedom from discrimination for LGBTQ people and would be willing to vote for a revised equality law that includes this which they call religious rights protections and some changes to transgender provisions.

Some Republican watchers have said enough Republicans would likely join Democrats to reach the 60 votes needed to pass the Senate Equality Act if Democrats accept the changes proposed by moderate Republicans.

However, other Republicans, including the national LGBTQ GOP group Log Cabin Republicans, have said the equality law should be scrapped altogether following the landmark 2020 U.S. Supreme Court ruling known as the name of Bostock c. Clayton County. The ruling states that Title VII of the US Civil Rights Act of 1964, which prohibits sex discrimination, also prohibits employers from discriminating on the basis of sexual orientation and gender identity.

Proponents of the Equality Act have argued that legislation is still needed to ensure LGBTQ people are fully protected from discrimination in other areas such as housing and public accommodations.

Representatives from both sides have said negotiations have been underway over possible changes to the Equality Act since at least the start of last year, but nothing has emerged from those negotiations reported this week.

Many LGBTQ advocacy organizations, including the HRC, said the GOP had suggested changes to the Equality Act related to “religious freedom,” which supporters of the bill say means a right to discriminate against LGBTQ people on religious grounds in a non-religious setting such as a private business open to the public, is unacceptable.

Most LGBTQ advocacy groups have also declared unacceptable GOP proposals to weaken or remove protections for transgender people in legislation, saying these proposals are being promoted by people who have been misled or are misleading themselves. even mislead others to believe cisgender women in sports and in public restrooms. as well as in school bathrooms and showers would be adversely affected by the current version of the legislation.

With both sides in what most Capitol Hill watchers consider a complete stalemate, Senate Democrats, including Senate Majority Leader Charles Schumer (DN.Y.), have not indicated their will to put the Equality Act to a vote in the Senate this year.

Schumer’s office did not respond to a Blade inquiry last week asking if Schumer would consider bringing the Equality Act to the Senate for a vote this year or next year if Democrats retain control of the Senate during midterm elections of 2022.

With that as a backdrop, David Stacy, HRC’s Director of Government Affairs, told The Blade in a February 25 statement that passing the Equality Act remains a high priority for HRC and the LGBTQ+ community. .

“Passing legislation through the US Senate is not easy,” Stacy said. “In the meantime, support continues to grow for the bill, and we believe the Reality Flag campaign will continue to generate the awareness and education needed to continue to build support and pressure for action,” a- he declared.

“Since our launch, we’ve already seen people say they had no idea LGBTQ+ people didn’t already have these protections, and that’s what we aim to do here: educate people and inspire them. to take action at the grassroots level across the country – call their senators and make it clear to them that it’s time we need to do that,” Stacy said. “Some people may be ready to give up. We’re not. “, did he declare.

In its three-page statement announcing the launch of its Reality Flag campaign, HRC says the campaign is produced in partnership with a team of advertising and public relations agencies affiliated with international marketing and communications giant WPP.
“While the campaign aims to galvanize public support for the Equality Act and inspire public action on RealityFlag.com, it also highlights the importance of raising and showcasing the real stories and lived experiences of LGBTQ+ people affected by discrimination,” the statement continued.

It says stories about individual LGTQ people will primarily be featured in “video vignettes” created by television writer and director Joey Soloway, the Emmy Award-winning creator of “Transparent,” an original television comedy-drama series from ‘Amazon Studios on a Transgender. wife and her family. Soloway identifies as non-binary and gender non-conforming.

“These stories…will be amplified through both an advertising campaign, including partnerships with 20 national media platforms, achieving over 30 million impressions expected at launch, including TV, print, billboard, video, audio, film, OOH, social media and search,” the HRC statement read.

Access to some of the video ads planned for the HRC Reality Flag campaign is available at RealityFlag.com.