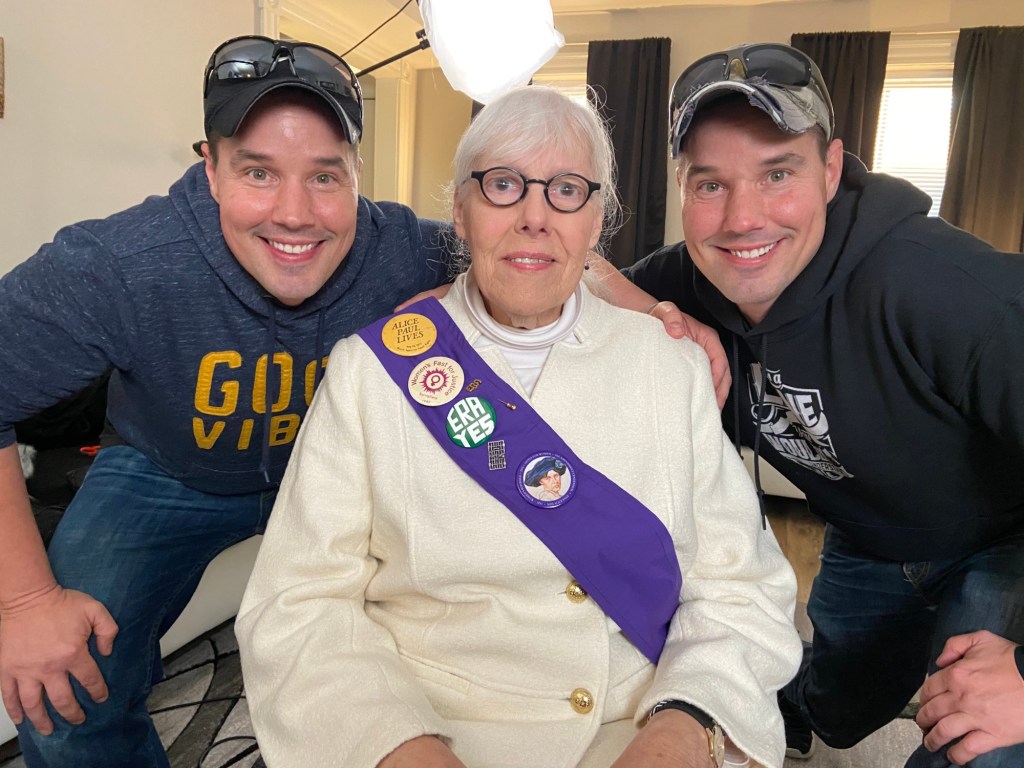 Long Beach resident, longtime champion of women‘s equality and grassroots activist Zoe Nicholson fondly remembers the release of the comedy film “9 to 5” in 1980.

The film – starring Hollywood legends Jane Fonda, Dolly Parton and Lily Tomlin – follows three women living out their revenge fantasies against their chauvinistic and sexist boss, played by Dabney Coleman. Before the plot reaches its boiling point, the three women manage to put in place new and better labor policies that actually improve the company’s productivity and the conditions of the employees.

The iconic film exposed moviegoers across the country to the discrimination women face in the workplace.

In the years since the film’s premiere, Nicholson said in an interview this week, little has changed when it comes to workplace equality. Nicholson addresses this lack of progress in an upcoming documentary called “Still Working 9 to 5,” which will premiere Sunday afternoon, March 13 at the South by Southwest Film Festival in Austin, Texas. The documentary, directed by Camille Hardman and Gary Lane, delves into the success and legacy of “9 to 5,” and features some of the film’s original cast, as well as the television series and Broadway show that it engendered.

The documentary, however, also explores gender equality and workplace discrimination in the four decades since the film’s premiere, as well as the work done by activists, which Nicholson discusses in the film.

“There’s still a pay gap,” Nicholson said Friday, March 11. “There are still not enough female CEOs; these problems have not progressed.

Nicholson is no stranger to activism. She was among seven other women who went on a hunger strike in 1982 in the Illinois statehouse to urge lawmakers to ratify the Equal Rights Amendment, the initiative that would guarantee the equal rights for American women in the US Constitution.

She’s since made appearances in marches across the country, as well as more grassroots efforts, like the Long Beach Suffrage 100 movement, which she helped organize.

Nicholson said she was approached by Gary and Larry Lane after seeing her speak on Ann Curry’s 2019 TV series ‘We’ll Meet Again’. The twins asked if they could present her speech during of a women’s march for a project telling the story of “9 to 5”.

As filming for the documentary progressed, Nicholson continued his fight for the ERA to become the 28th Amendment to the Constitution. In 2020, Virginia became the 38th state to approve the Equal Rights Amendment, with Nicholson in attendance; this gave the ERA enough states to be fully ratified.

But due to a ratification deadline of 1982, the amendment remained in limbo.

That didn’t slow Nicholson down, however. At Sunday’s premiere, which Nicholson will attend, she plans to continue the fight — and seek to educate others.

“I will be there representing the Equal Rights Amendment,” Nicholson said.

She will be joined by Jeri Burton, president of equal rights group Nevada Now, and activist Lilly Ledbetter; they will carry ERA decorated tambourines. Ledbetter’s name adorns the Fair Pay Act of 2009, which makes it easier to file pay discrimination lawsuits by resetting the statute of limitations after each paycheck.

Nicholson said Friday she was looking forward to boarding her flight and heading to the festival, where she and others plan to see “what kind of trouble we can get ourselves into.”

After the festival, she’ll head straight back to Long Beach, where she was invited by Councilwoman Suzie Price to speak about women’s history at Tuesday’s city council meeting. She will also discuss her dream project: creating the Long Beach Commission for Women and Girls.

“I’ve been fighting for this for 45 years,” Nicholson said. “The council voted unanimously to go ahead, but in 1975 the council could not get a second vote.”

Sign up for The Localist, our daily email newsletter with handpicked stories relevant to where you live. Subscribe here.

Should you play Hogwarts Legacy if you care about your trans friends?