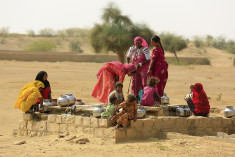 Gender issues, climate change and security issues are interconnected in complex and powerful ways. Unfortunately, some of these links have not received enough attention from academics, policy analysts and policy makers. This has serious real-world implications for advancing gender equality, mitigating climate change, and promoting peace and security – three priorities everyone should care about.

The link that has received the most attention is the link between climate change and security issues. Researchers have studied environment-security dynamics for decades, and in recent years the climate studies and security studies communities have explored this connection: this exploration has been a two-way street. Moreover, this recognition of the links between climate and security has moved from the academic and analytical worlds to the policy communities.

For example, UN Secretary General Antonio Guterres has pointed out that climate change is “an aggravating factor of instability, conflict and terrorism”. In October 2021, the US government released a series of reports to make climate change a political priority in US foreign and security policy.

Unfortunately, in most policy discussions on climate change and security, gender perspectives are missing from the action.

This does not mean that gender issues have been ignored by everyone. Since the mid-1990s, feminists, gender scholars and women‘s rights activists have worked to advance understanding of gender, climate and gender security issues, and they have established that these connections are powerful. . They also pushed for political actions.

Their efforts notably led to the adoption of UN Security Council Resolution 1325 on Women, Peace and Security (WPS) in 2000 and nine subsequent WPS resolutions in the 2000s and 2010s. have adopted National Action Plans (NAPs) to integrate and implement WPS priorities into national security policies.

Since 2013, gender has been mainstreamed into the United Nations Framework Convention on Climate Change (UNFCCC) by requiring annual reporting on the gender composition of state delegations and UNFCCC constituted bodies.

In October 2021, the US government released its first-ever National Strategy on Gender Equity and Equality, who highlighted the importance of elevating gender equality in humanitarian relief and security issues as well as promoting the link between gender equity and responses to climate change.

Women’s rights activists also pushed the UN Commission on the Status of Women (CSW) to make climate change and disaster risk reduction a priority theme during its 66and session in March 2022.

All of this is significant progress.

The problem is that almost all of this effort has come from gender champions – academics, analysts and gender activists: it has been a one-way street. For example, the gender equity and equality priorities developed in the U.S. Gender Equality Strategy have not been included in the series of reports published by the U.S. government on foreign policy and of security.

Even relatively simple and visible commitments, such as ensuring gender balance in decision-making bodies and national delegations, have been poorly implemented. At the COP26 conference in Glasgow in late 2021, for example, women’s representation in the meeting’s sixteen constituted bodies was just 33%. The seriousness of political commitments can also be measured by the amount of resources that governments allocate to these commitments. In 2018, only 22% of WPS NAPs had allocated budgets and, worryingly, average budget allocations for WPS NAPs have been declining since 2014. Few countries have introduced gender responsive budgeting, i.e. allocation of specific resources to gender-related priorities and initiatives. A final problem is the lack of global efforts to collect sex-disaggregated data on a range of social, economic, political, environmental and security issues.

The sad irony is that this gender obliviousness has enormous implications for stability and security. Gender scholars have established – in one of the most important social science findings of the past two decades – that gender inequality is strongly associated with instability and conflict, both within and between countries. them. Gender specialists have also shown that gender factors will be key to developing effective adaptation and mitigation policies as climate change progresses. Ignoring gender is therefore a mistake not only in terms of gender outcomes, but also in terms of security and climate outcomes.

The gender-security and gender-climate nexus, as well as the triple nexus between gender, climate and security, need to be developed more systematically. To date, the gender studies community has taken the lead in exploring these links and developing policy ideas. The security and climate communities must recognize that they also have a stake in these connections, and they must become proactive in developing gender-focused initiatives. And it is not enough to say the right thing: policymakers must also monitor the implementation of gender-focused policies and budget commitments.

This blog is based on the contribution of Chantal de Jonge Oudraat and Michael E. Brown to 21st Century Diplomacy: Foreign Policy is Climate PolicyGender, Climate Change and Security: Making the Links.

Chantal de Jonge Oudraat is a Wilson Center Fellow in the Environmental Change and Security Program (ECSP). She served as President of Women In International Security (WIIS) from 2013 to 2021.

Sources: The University of Sydney, the White House, the United Nations.

Photo credit: Unidentified women draw water from the well and bring it to their homes in rural Jaisalmer, India, courtesy of Yavuz Sariyildiz, Shutterstock.com.