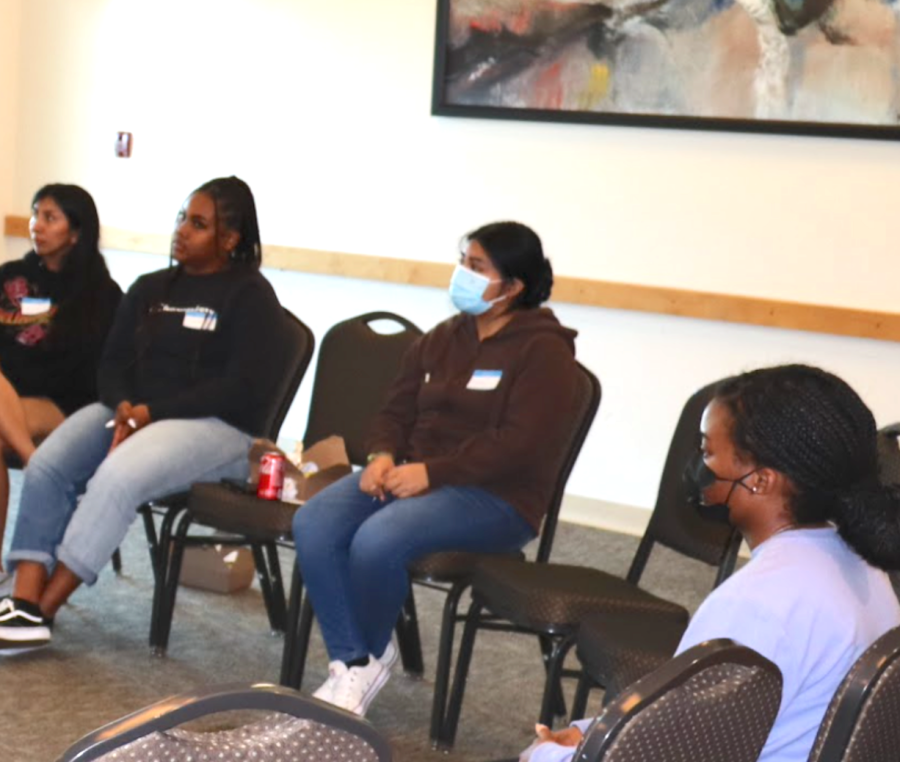 It’s that time of year again when families from all walks of life come together for the holidays, but sometimes the older and younger generations can have a difference of opinion that can lead to heated disagreements or tension.

On November 9, PASRC held this “Clap Backs” event on the Cal State LA campus. Inside the San Gabriel room were tables filled with Beyond burgers, fries, salad, regular burgers, and student drinks. Ramirez felt it was necessary to have food during the event because it was around lunchtime and the students were likely coming straight from class.

“In the tradition of Thanksgiving coming soon, and you know the holidays, someone says something out of their pocket, and you just have to answer them. ‘Clap Backs’ is meant to be a representation of how society has put certain things on black people that are not OK,” Ramirez said.

Ramirez also had help for this event from Rosemary Ché, a major in Television, Film and Media Studies (TVFM), and Tymera Leonard, a major in history, who were both at PASRC event last month.

“I got together with DeAngelo and Tymera in zoom meetings and helped put together the issues we wanted to talk about that reflected issues in the black community. I personally enjoyed planning this event because I hoped I could connect with the black people of Cal State LA,” Ché said.

Discussion topics at the event included colorism, sexism, homophobia and transphobia, as well as the rule book. The rulebook is the unspoken rules black men must follow to navigate and survive in a white society, according to Ramirez.

“[The ‘Clap Backs’ event] is for us to talk about these issues that divide us,” Ramirez said. “We have to have these conversations because we don’t have a safe space to have them, and when we do it’s heavily guarded by someone who isn’t from the community.”

Students were encouraged to come forward and respectfully share their experiences and opinions. As Ramirez had said, “You don’t take revenge on the person. Pick up the idea.

Prince Brandon Johnson, a business management student, was present at the event.

“I was interested to see what the space was like for black students on campus, as there has been virtually none this year, in my experience. It was good to get out there and experience that,” Johnson said. “I enjoyed the conversation and I really hope there’s another one.”

Counselors from Counseling and Psychological Services (CAPS) were invited to the discussion to engage students in conversation, to help them unpack their emotions and help them better navigate these controversial topics when they come to dinner. of Thanksgiving.

Pedro Larios was one of the CAPS members at the event. He is a master’s student in family counseling and is currently doing his hours at CAPS.

“I actually came here to Cal State LA as an undergrad and did Pan African Studies as one of my majors, so it’s definitely a great way to give back to my major which helped me succeed,” Larios said. “I think the event was great. The topics covered were extremely relevant and super important…So I’m super happy with how the event went.

There were eight discussion questions in total, the first was “How are we first socialized?” In what ways are socialization messages reinforced?

Many students felt that socializing began at home with parents or at church and the phrase “respect your elders”. All of the students said they felt that having a difference of opinion or correcting parents or older family members was considered disrespectful. This can be harmful and hinder communication and understanding with their elders. Often these students are 18 and older and are legally adults, but are still considered children. Ramirez mentioned that respect goes both ways and that a disrespectful elder cannot demand respect from you if he hasn’t earned it.

Another discussion question was, “Why is it more tolerable for a Eurocentric man to explore his sexuality, but not for a black man?”

Students discussed the stigma of being a black gay man in an over-masculinized community and how black trans women often go unrecognized for their huge role in creating and shaping queer culture. Several students pointed out how white men are often the poster boys for gay culture and more widely accepted. It has also been discussed that black gay and trans people are often the most murdered and face disproportionately the most hate crimes.

According to Center for American Progress.

One of the final questions in the discussion was, “Why is it tolerable that black women‘s voices go unheard?” »

Students discussed the mistreatment and oppression of black women that has endured since slavery. One student brought up the fact that black women are seen as the lowest and not respected or taken seriously at all. This led all the students to explain how when black women go missing, they never get as much airtime in the news as a missing white woman, if any coverage at all.

“Black people constitute 13% of the American population and 31% of the missing people; 54% of missing persons are white, despite representing 76% of the population. A 2013 study found that the media covered missing white women far more often and more intensely than everyone else,” according to The Guardian.

Not listening to black women is also known to be a medical problem.

According Harvard School of Public Health.

“I didn’t really have a big community of black friends and family,” said TVF student Kayla Jamison. “Even though I don’t have that direct connection, I can still relate to a lot of the feelings and experiences of other people in my community. I appreciate this assurance that we are here and that we support each other.